So this was a project to make a shield similar to my red and gold one for a friend who’s also playing a Crowan Rose in Fools and Heroes LARP (a group of female paladins of the Goddess of Battle, essentially).

She wanted the rose boss and for the main colours to be silver and red, with just a little bit of green for leaves and a wooden back. It’s 36in top to bottom and has a punch grip on the back.

For the basic construction of a shield, you can follow the same principals as laid out in the pretty well done Quiche Commandoes site HERE.
The only few things I disagree with, however, are that you shouldn’t use felt tips on the plastazote as it can eventually come through the latex and muck up the paint job (use pencil instead) and that a clamp really isn’t necessary in order to make the blades (or shields, or anything) dry flat. Just leave the bottom bit flat on a surface and carefully press the other side down. Then put it on the floor and stand all over it till it’s good and pressed down.

I used 12mm foam for the front, and middle (with the slot cut in for the core) and then, instead of having a full back layer, I cut out a nifty shaped panel (as below) and made it into a partial back (3rd) layer. This made the shield a tonne lighter and thinner and still means the core is secure and stuff. 24mm total is what I’d probably go with minimum thickness for a shield like this… Though smaller ones might be okay with less.

1. Cut out 3 shapes (one of which needs the core groove in which the core can be laid inside and hot glue gunned into place). They don’t all have to be the same size (as I said, my back layer was smaller to make the whole thing lighter and thinner).

2. Glue in the core to the middle layer before gluing anything anywhere. Hot glue gun, reinforced with cloth tape double at the ends and all the way along the blade on both sides. 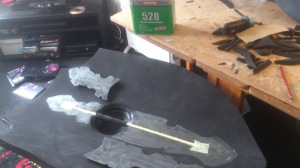 3. If you want the shield curved, then you need to contact adhesive the front and middle and leave them to dry. Lie the front face down and hold the middle layer curved so that only the middle of the shield touches. Make sure it’s straight and DONT let more than a couple of inches down the centre touch. Roll the whole thing to the side, making sure it’s curved BEFORE you press them together. Then repeat, rolling around the other way, curving the other side, and stick them together. Basically the only rule is making sure they’re curved BEFORE they touch and stick together. If they glue together already curved, they can’t ping back into place because the other layer holds it in place. You can use a former, hold the layers across a curved surface and then glue. You can do it however you want really.

5. When it’s secure, glue the third layer on the back to fully secure the core inside foam.

At this point, the shield just needs a boss on the front to cover the hand grip, and then it’s all structurally sound. Everything else is just making it look pretty.

For the boss, I have a bowl shaped plastic thingy (it used to be one of the huge Lindor balls full of chocolate, turns out it’s the perfect size for making bosses).

Cut out a circle BIGGER than the hole in the shield and squeeze it into the bowl. Take hot air gun/hairdryer and blow it on it till it’s super hot. Don’t touch. Do it until it’s hot, then keep going for a bit and then leave it to completely cool down before trying to take it out. It should have assumed the position and stayed that way. If you need to, you can do it again. Then just glue it down on the edge of the hole and voila! Boss! 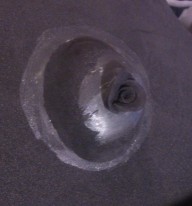 Rose Boss – I cut out lots of little semi-circles. Bevel the edges wavey and bevel the bottom edge too so that the whole petal angles at a sort of 45 degree angle.

The centre petal wants to be curled around into a spiral and stuck down first, then continue to wrap petals around. Always offset them, so overlap the petals instead of putting them side by side (see picture).

From there, make the petals a little bigger and longer, but continue to wrap them around until you build up the whole boss into a rose. The circle boss

means that the shape of the rose should come out naturally, you don’t have to taper the sizes to make the right shape.

When it’s done, it should look like a rose. Hopefully…

Then, once the boss is done it’s just down to make the rest of it look as cool. With this one, I made lots of tiny roses in a similar way, except I just experimented with one single semicircle bevelled very wavy, and just gluing it around in a spiral. They worked okay, but not quite as nice as the more complicated method. They needed little cuts making in the petal to make it look like separate petals. They’re quick, though, and quite easy. I decided not to use them all, because it just looked a little busy, but this many seemed okay:

Then I got the pyrography kit out. The patterns wanted to be based on curly, twirly elegant sort of vines and roses design, so I started off with the border. She wanted a red border and a silver background, so I had to separate the two areas. I made a repetitive leafy pattern all the way around the edges with the pyrography.

I did the same on the back of the shield too, to separate what would be wood from the red border too.

(Also remember that the handle needs to be wrapped with foam to cover the core too).

Then it was onwards to latexing. 3 coats of black latex later… And it’s time for painting!

For the wood, painting motion rather than stippling motion across, not using very much paint on the sponge at all. Try and leave a lot of black too, don’t get it in the indents where the woodgrain was carved with the pyrography tool.

One coat of plain brown as you can see above doesn’t make a very solid colour. It took about 3 coats of progressively lighter brown to get a good layer. Putting a little white in it each time makes the tones different and it looks a lot better (in my opinion).

The silver down the middle took 2 stippled coats to get it nice and solid. If you want it darker, just do one coat 🙂 Again, don’t get it in the carved bits so that the black is nice and clear against the shiny silver. Also try and keep it off the roses.

The red I used was acrylic rather than poster paint, but either works just as well. Keep the paint out of the grooves between leaves and stippling motion for this one too. Took 2-3 coats for this one to be solid. Let it dry fully between coats so you can see what the colour is like when it’s dry.

Last but not .least, the green of the leaves to just break up the colour and provide a little bit of

contrast to the red.

The leaves on this one are still wet – they dried nice and dark, which is a lot less Christmassy and garish because red and green are very contrasty.

You can see on the one underneath where it’s wet and where it’s dry it’s quite obviously different.

Have a look around and let me know if you have any questions or ideas for posts!