So, further on from Dragon Skull Helmet – Walkthrough Part 1 I wanted to do a fairly quick post about the other Dragon helmet I did (this one being my first attempt at doing one). The paint job on this one was fairly simple, but I thought it was also effective and good for doing any bone sort of colouring, so it seemed worthy of a post. 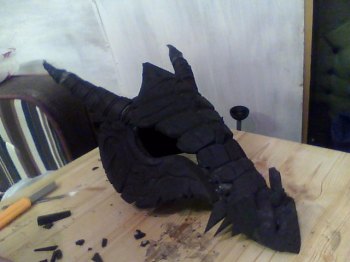 For actual construction tips, have a look at #1, so I’ll let you know the couple of changes from the last one, and then I’ll get on to the painting.

With this one, I instead wanted a different style of horns, so I roughly carved them out of upholstery foam, and then took a really long, thin piece of LD45 and wrapped it tightly around from the thickest bit and down to the thinnest bit. But that’s pretty much the only exception. I didn’t do any scales on this one (I hadn’t bought my pyrography kit by that time) so I did carvings and also, as this one was supposed to be an ancient dragon skull, I carved cracks into it. For the cracks, I took a small scalpel, put it straight down into the foam (though not all the way through, half way at most) and made a very rough little circle. But when it’s roughly done, the little circle just comes out as a little jagged hole. From there, I cut angular lines going out from it in all directions, and did offshoots from each of those.

Another thing I did to make it look old was to cut 3 parallel lines across the panels, to simulate claw marks. It 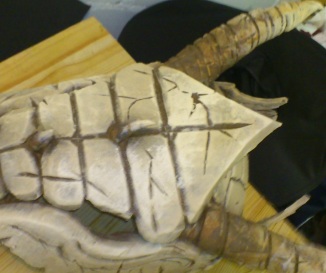 Anyway – Everything else construction wise was just the same, so lets get on to making a bone effect with latex paint.

Nowadays, I spray my first latex coats on to the foam, by mixing black acrylic or poster paints with the latex and then doing a good 3 layers with the spray gun and air compressor. But back in the days when I was learning and making this particular project, I didn’t have that. Doing latexing by hand is a huge pain in the buttocks, because instead of needing 3 coats, you need upwards of 9-10.

Mix up the black latex, and then with a sponge (or alternatively, I use offcuts of the upholstery foam that I use elsewhere) stipple the latex on, making sure to get into all of the cracks and corners. I say stipple because it gives a thicker coat but if you’re doing sword blades or woodgrain I’d do it in a brushing motion (with the sponge, though, personally) so you don’t end up with it looking kinda bumpy. The bumpy isn’t really a worry, but for things that would have a length-ways grain, you’re better painting it on.

After your 2nd or 3rd coat, you might realise it’s a lot of hassle, but keep going. On this helm I did about 10 coats, but after a couple of years now the nose is a bit ripped and stuff. Tis the perils of doing it by hand, you really do need to build up a good thick coat. A hairdryer (on a cool-ish setting, kept at least like half a metre away from the latex or it might bubble and you’ll have to peel it all off and do it again!) can be used to speed up the drying process. The grey latex will dry black and give you a nice flat canvas to start painting on.

With this one, I decided I wanted to try for a fairly natural bone colour. Black, I decided, was too harsh and false looking, so for my last 3 layers of ‘base’ latex, I mixed up brown latex instead of black and painted that on all over. Because latex dries clear, I usually find I have to do at least 2-3 coats of a colour to get it solid. (But if you put more colour into the latex, or use white paint as well because it makes it more opaque for some reason, you can get it more solid quicker).

With the base colour as brown, obviously the bone colour had to be more pale/creamy/white. I could have gone for mixing up white paint and slapping it on, but to make it look more natural, more layers of gradually lightening tones works a lot better.

BEWARE! – Working with the colour white and latex is a hazard. The white latex goes off coloured a lot quicker than other colours. Basically, this is because latex has a tinge of colour to it when it dries, and so does isoflex. When you have something painted white, it’s far more likely to go orange faster. So use it sparingly, or mix up a very light tone of something else, rather than using pure white.

So, I took the brown and put in a little bit of white, and then stippled it on gently. If you gently stipple, and don’t let any of the lighter colour get into the cracks or indentations, you get a lovely contrast and it brings out the details.

You can see that even after just one coat of slightly lighter brown, you can see the details a lot more clearly. It also starts to look more like bone. But bone’s a lot whiter and I wanted this one to be especially light like bleached bone. So I continued, doing more and more layers of lighter and lighter browns, until what I ended up was a very light cream – almost, but not quite white.

With each layer of a different colour, you want to stiple more gently, putting less paint onto the model. If you covered it with the lightest colour there’d have been no point in doing the previous ones, because you’d cover them up. So stipple more sparingly, leaving some of the previous colour showing. Eventually, with the lightest colour, you should only really be doing little highlights. The tips of the ridges, highlights on teeth, the most prominent details. The more sparingly you use it, the more effective the highlights will be. 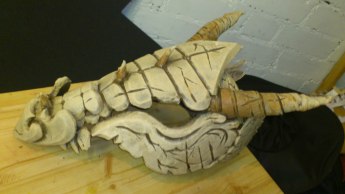 Eventually, you should end up with something that has depth – the dark browns in contrast to the light highlights do this. Contrast is one of the important things in really showing off the detail. There’s no point in carving awesome detail if it all just blends together.

You’ve got two options when you’re finished painting with latex. The most common (and one I ALWAYS use) is to coat it with Isoflex Special Primer (clear). This gives a shiny finish and brings out the colours very nicely.

BEWARE! – Isoflex turns golden orange when it dries. A very thin layer won’t be a problem, but if you put on too many coats it can turn the colours orangey more quickly. Isoflex also is VERY STICKY, so never let two isoflexed items touch. You’ll never get them apart. And make sure to check after say 10-15 minutes that there are no drips. If there are drips when it’s touch dry, there’s pretty much nothing you can do about it. Be especially wary of sword tips. I usually aim for 2 very thin coats of isoflex. Emphasis on ‘very thin’.

DOUBLE BEWARE! – Isoflex is also VERY toxic. So wear gloves, and a mask when you’re working with it.

When it’s dry (isoflex should be left to dry overnight (12hrs) really, after the last coat) and then spray it generously with silicone spray. You can silicone it as much as you want to, it’s also good for upkeep to protect it too. The silicone rubs off naturally, or you can wipe it down a little if its too slimy for you.

If, for some reason, you can’t get hold of isoflex or really don’t want a shiny finish, you can coat it with talcum powder, rub it all over to take the stickyness out of the latex and then kind of rub it off to stop having that horrible muted colour to the latex. I would always advocate isoflex though, as it protects the finish and makes it look more awesome.

Then you end up with the finished piece!

Hope you enjoyed seeing the process of painting the dragony helm (Number 2)! I’m still an amateur at all this though, so I’m sure some folk have better ways I could do things. Feel free to leave a comment with your thoughts!

If you have a go and try any of the techniques used in these walkthroughs, I’d LOVE to hear from you about how it went. Get in touch 🙂

Have a look around and let me know if you have any questions or ideas for posts!